3:AM: Immediately starting White Ibis after The Garbage Times, there is a certain softness, almost like a glow in White Ibis. At the same time, there are a lot of apparent juxtapositions. The weather is different, the environment is different, the animals are different, the people are different. Chicago feels like a hustle-all-the-time city (the narrator doesn’t even take a day off from work—shoveling snow when it is snowing, just because, and then giving all his money away at the bus stop). Florida is like a more chill place. What was your intention with this? And maybe, it goes back to whether or not you were intending to write both pieces to go together.

We pedaled down a long unlit section, moving toward the furry light of the one and only streetlight.

Halfway down the long unlit street it glowed white light onto the trees and the road for like thirty feet.

We braked, letting a group of peacocks waddle across the street. [White Ibis]

Sam Pink: yeah i’m not really sure, but agree there is a definite tone contrast, in terms of the settings. it’s weird too because i didn’t even see / understand a lot of that about chicago until i was in florida. it’s another form of input that will have different consequences. i recommend that approach for all people creating shit. throw some different shit in your blender.

3:AM: In White Ibis, just very quickly—before I forget—there’s red Styrofoam plates all the time, everywhere (at almost every party the narrator attends). I have a bunch of question marks in these sections. What’s going on man?

3:AM: Ha! Well, I think you capture very well, the day-to-day anxiety that exists when you are forced to attend a function or join in on an activity you do not want to be a part of (and this isn’t out of malice or anything). You worry so much about it, yet, when it actually takes place and happens, it’s usually not so bad. You do this great thing with characters where there’s a lot happening between the lines. The protagonist, for instance, realizes he is not alone in not wanting to be at some of these events and through talking to others (& body language, there is a lot of body language stuff happening) he is able to finally / actually relate to some of the people. Also, it’s that he creates these elaborate stories and potential scenarios for the people at these events that helps him get through everything (whether or not these stories are even true). And I think this is powerful because it is something we all do, yet you are able to present it in a manner that is totally easy to relate to and easy to digest. And I think that’s because you just speak from the heart… it is genuine. I think this is why and how so many people are able to connect with your work.

SP: thanks, that means a lot. yeah i don’t think any of that stuff is creative or even innovative, like you said, everyone experiences it. i guess it’s just captured well because when i go to write something, if nowhere / nothing else in my life, i want it to be completely bullshit free. and i don’t necessarily mean realistic, even though in my case, it’s realism. but like, i guess what i’m trying to say is, it’s important, for me, as a writer, to present myself / others as they are, without any polishing. especially the ‘me’ character. i like writing like fante and mcclanahan for how they are able to get past the ‘i want to present myself as the holy main character who has no flaws and always knows the right thing to do’ and let themselves be the asses they are. there is no better way to illustrate something than through yourself as the character with the same spite / fate you would unleash on a third person character.

3:AM: You hang out a lot with your girl’s family in White Ibis. If they read White Ibis, how accurately are they portrayed in the book? Were you conscious of this, as your wrote White Ibis? Like, being aware that these people might actually read about themselves, and how this might affect (potentially) their perception / how they act around you? Knowing, “Oh shit, we might be in his next book so now we’re going to act a certain way, ALL THE TIME, just in case.”

SP: pretty accurately. i told them about it as i was doing it. whenever i incorporate people i know, there is almost never malice. if i include someone, it’s usually because i find something endearing / good about them. i don’t like the kind of stuff where people use close acquaintances or whatever, to recreate some story in their own favor. strangely enough, i somehow never really think ‘i’m going to write about this’ while something is happening. which I think is a blessing, because then you become the little twit reporter with the voice recorder, hiding in the corner.

3:AM: You have two emails in White Ibis, from fans / readers. Are these real or edited at all? If so, you let the authors know you’d be publishing the emails? And whether or not it’s real, I found it supremely endearing to read some of the ideas communicated to you in response to your work.

SP: yes they are real. one word out of both of them was edited because the word was used the wrong way. and yes i asked for permission. and yeah that’s why i included them. one of the themes i noticed in white ibis is ‘coming out.’ in the sense of exploring the world and opening yourself to it. it’s the last line / image of the book. and so i hadn’t written about ‘being an artist’ yet, but it had become a huge part of my life, so i wanted to include parts of that world in the book. it’s an attempt at showing unity and love and the shit that can happen if you just do what you do. the one email is also almost a direct parallel to the situation with the girl scout at the end. so i like that parallel. 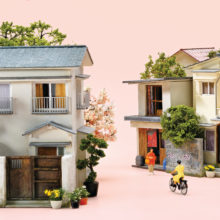