Catapult publishes “On Signs and Solitary Women; or, Why I Kept the Bureau for Myself,” a new essay by Tallulah Pomeroy 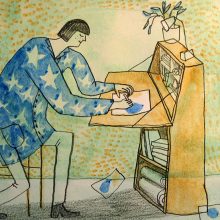 The bureau was in fine condition. The lid opened smoothly to make a table, and there were all these little drawers inside, for my pens and things I’d found on beaches. If it was mine, that is. Underneath were sliding glass panels, striped clear and gold. “Very seventies,” she said. We hefted it towards the van. I was parked with the side door facing the traffic, which was inconvenient, as we had to carry the desk into the road. We paused to let a car come past, putting the desk down onto the tarmac. I’m not sure how it happened, but somehow it was my responsibility to hold the desk upright, and I didn’t realize quite how necessary that was. I stood up and let go, and the poor little desk fell flat on its face. There was a great smashing sound. The car saw the broken glass and changed its mind, making a hasty three-point turn. I apologized profusely, even though the desk was mine now. I still wanted her to think I’d take great care of it. She didn’t seem to mind. Suddenly my apology seemed evidence of a silly need to please. We cleared up the glass and put the now panel-less desk in the van.

“I’ve been thinking I might get one of these next,” she said, looking at my beaten-up white Transit. “Maybe this is a sign that I should get on with it.” She meant my coming to get the desk, us having been to lots of the same places. Maybe even the desk smashing on the road, who knows. Sometimes things have to break to make us notice. We looked at each other steadily, and this time she almost smiled.

It’s strange to be a sign in someone else’s story. As I drove away, the desk rattling in the back, that’s how I felt—oddly two-dimensional, just a conduit for information from the universe, intended for someone else. If that was what today was for, if I was meant to get that desk just to show a stranger the course of her life, then that’s an odd thing indeed. I’m not saying the bureau wasn’t lovely, but what if all the decisions I’d made that morning—seeing the ad, taking the drive, going to the Black Mountains, fighting with Alex, hey, even buying the van in the first place—were all for the purpose of showing her what she should do next? The idea of playing a supporting role in Life in General made me uncomfortable. I decided I’d go for a walk before I drove home.

She’s right, Portishead’s dull, but I have a thing for it all the same. The view from the waterside is almost universally brown, and you don’t get that in many places. Brown rocks, brown mud sinking into brown rivermouth, brown Wales, brown clouds. You wouldn’t expect it, but I find it conducive to thought. I walked along the rocks, looking at barnacles, and my brain began to unspool itself with my steps.

I thought about the fight. I won’t bore you with the details, except that it had been decided by us both that there were some things I needed to work on. Alex is a kind man who helps people for a living, and he was willing to help me too. My ups and downs, my melodrama, my intensity. All these things could be improved, and I had asked him to be patient with me. Now I thought about how I was going to work on myself, moderating the extremes I had been struggling with since I was fifteen. “My highs and lows don’t talk to each other,” I had cried to him. “I’m not OK.” This feeling of being not OK had been with me for a long time. When I was high, I was determined that everything would always feel this good while also terrified it wouldn’t. And when I was low I could not imagine there was any way for things to be all right again. I would see a drop in mood as the beginning of an everlasting decline. I didn’t think, Maybe I’m tired, maybe I had a bad day; I thought, There’s something wrong with me. Six sessions of counseling had shown me this was down to a basic insecurity. Without a level horizon of “all right,” I would swing from high to low, living inside those moods totally. “What do I do about that?” I’d asked the counselor, and she’d been vague.

“We’ll get to that next session,” she said. I reminded her it was our last.

She looked uncomfortable, rearranged her feet on the furry carpet, then smiled widely. “You’ll be FINE.”

Women.com names A Girl’s Guide to Personal Hygiene a Best Book of the Year

Women.com names A Girl’s Guide To Personal Hygiene one of 10 Books With Covers So Beautiful, You Can Judge Them 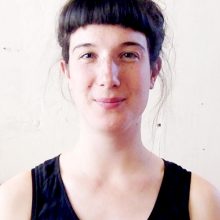