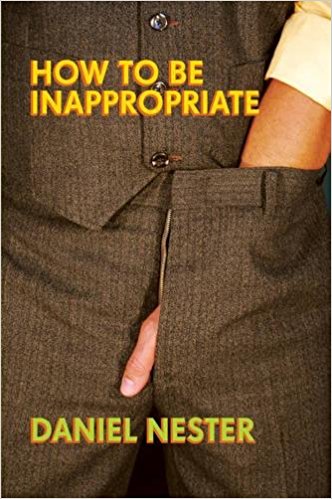 Dry, offbeat, and mostly profane, this debut collection of humorous nonfiction glorifies all things inappropriate and TMI. A compendia of probing essays, lists, profiles, barstool rants, queries, pedantic footnotes, play scripts, commonplace miscellany, and overly revealing memoir, How to Be Inappropriate adds up to the portrait of an artist who bumbles through life obsessed with one thing: extreme impropriety.

In How to Be Inappropriate, Daniel Nester determines the boundary of acceptable behavior by completely disregarding it. As a twenty-something hipster, he looks for love with a Williamsburg abstract painter who has had her feet licked for money. As a teacher, he tries out curse words with Chinese students in ESL classes. Along the way, Nester provides a short cultural history on mooning and attempts to cast a spell on a neighbor who fails to curb his dog. He befriends exiled video game king Todd Rogers, re-imagines a conversation with NPR’s Terry Gross, and invents a robot version of Kiss bassist Gene Simmons.

No matter which misadventure catches their eye in this eclectic series of essays, How to Be Inappropriate makes readers appreciate that someone else has experienced these embarrassing sides of life, so that they won’t have to.

"If there was Nobel Prize for Achievement in Inappropriateness, Daniel Nester would be Laureate of the Universe. Until then, he'll have settle for having written this shockingly innovative stunner of a book. Nester brings his irreverent, elegiac sensibility to subjects from ranging from the essence of literary truth to the enduring mystery of flatulence, managing in the bargain to highlight the bleak hilarity of human existence--which, when you think about it, is the most inappropriate thing of all." --Rachel Shukert, author of Have You No Shame? "Daniel Nester is funny as hell." --Stephen Elliott "Daniel Nester is a stone-cold genius. Clever, lyrical, inappropriate in all the right ways--I'd rather read him than just about anyone right now." --Darin Strauss, author of More Than It Hurts You "Daniel Nester's essays are haunted by a Victorian perversity. His writing exhibits a kind of Tourette syndrome in which the author continuously abases himself and revels in his own shortcomings. It's a painful kind of comedy leavened by gentle good humor and wonder." --Thomas Beller, author of The Sleep-Over Artist and How To Be a Man "Former McSweeney's editor Nester (English, Coll. of Saint Rose), whose writing has appeared in The Best Creative Nonfiction, The Best American Poetry, and Poets & Writers, presents his debut collection of humorous nonfiction, amassing 41 years' worth of experience in nonconformity. His stories are, as the title suggests, inappropriate, and they often engender squeamishness, discomfort, and laughter. But they are fresh and, at times, touching, qualities that make this an enjoyable read. Subjects include teaching curse words to Chinese ESL students, reimagining a Terry Gross NPR interview of Gene Simmons by substituting Gene Simmons with an AI computer, a collection of references to flatulence in English poesy, the history of mooning, and out-of-context comments he made as a college professor in order to clarify and expand upon his students' writing. Nester includes photographs, illustrations, and a time line of his inappropriate acts from birth to the present. VERDICT Recommended for readers who enjoy memoirs and essays." --Library Journal 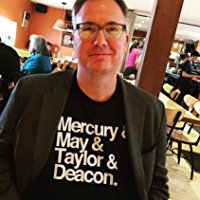 Daniel Nester is the author most recently of Shader: 99 Notes on Car Washes, Making Out in Church, Grief, and Other Unlearnable Subjects (99: The Press 2015). His previous books include How to Be Inappropriate, The History of My World Tonight, God Save My Queen I and II, and The Incredible Sestina Anthology, which he edited. His work has appeared in American Poetry Review, The New York Times, The Millions, The Atlantic online, and anthologized in Best American Poetry, Best Creative Nonfiction, Third Rail: The Poetry of Rock and Roll, and Now Write! Nonfiction. An associate professor of English at The College of Saint Rose in Albany, NY, he lives in Upstate New York with his wife and their two daughters. Find more at danielnester.com.