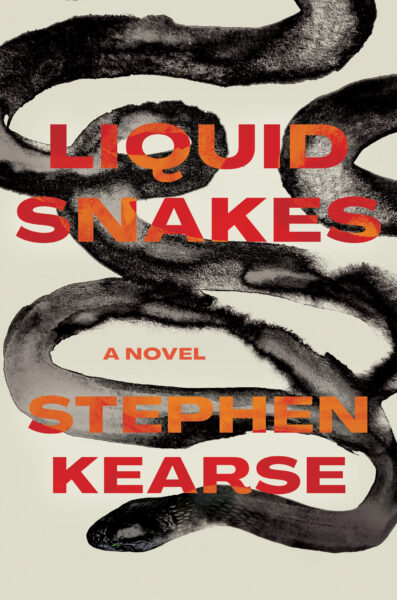 What if toxic pollutants traveled up the socioeconomic ladder rather than down it? A Black biochemist provides an answer in this wildly original novel of pollution, poison, and dark pleasure

In Atlanta, Kenny Bomar is a biochemist-turned-coffee-shop-owner in denial about his divorce and grieving his stillborn daughter. Chemicals killed their child, leaching from a type of plant the government is hiding in Black neighborhoods. Kenny’s coping mechanisms are likewise chemical and becoming more baroque—from daily injections of lethal snake venom to manufacturing designer drugs. As his grief turns corrosive, it taints every person he touches.

Black epidemiologists Retta and Ebonee are called to the scene when a mysterious black substance is found to have killed a high school girl. Investigating these “blackouts” sends the women down separate paths of blame and retribution as two seemingly disparate narratives converge in a cinematic conclusion.

Liquid Snakes is an immersive, white-knuckle ride with the spookiness of speculative fiction and the propulsion of binge-worthy shows like FX’s Atlanta and HBO’s Random Acts of Flyness. Transfiguring a whodunit plot into a labyrinthine reinterpretation of a crime procedural, Stephen Kearse offers an uncanny commentary on an alternative world, poisoned.

Stephen Kearse is a contributing writer at The Nation, where he covers music, movies, and books. His criticism and reporting have been published in The New York Times, The Atlantic, GQ, and Pitchfork among other outlets. His debut novel, In the Heat of the Light, was published in 2019 by Brain Mill Press. Originally from Atlanta, he now lives in metro Washington, DC with his family.