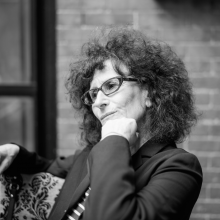 Nicole Miller: You open Men and Apparitions with quotes from Rabbi Abraham Heschel (“We must learn to be surprised”) and Flannery O’Connor (“Mystery is a great embarrassment to the modern mind”). Why start there?

Lynne Tillman: I’m not a religious person, but I do feel that life is more complex than most people would like to admit. Living in relationships is complex and mysterious, as to motivations and why things end or begin the way they do. If you think about the history of Modernism — leaving the basement for the well-lighted places — as if we could have that kind of great illumination all the time. There is a jaded quality to people who never want to be surprised. It’s as if to be surprised indicates a lack of discernment. Obviously, surprises aren’t always good, but I think it’s important to allow for not knowing.

NM: You’re thinking about this at the level of plot, as Zeke interrogates what he knows about his family, and at the sentence level. Your sentences move forward even as they question their own claims. Writers and readers are always subject to ambivalence and doubt, but you’ve elevated this uncertainty to a kind of religious awe.

LT: Certainly doubt and awe. For me, it’s not religious. It’s existential. It’s very hard to live with doubt, but it is what we’re served.

NM: Zeke’s research focuses on family photographs, and you include many images in the book. How do you understand the relationship between the prose and pictures?

LT: I’m using words to think about pictures. This relationship troubles the narrator. He wants to put words to images, but he knows that the image can’t necessarily be confined to words that might describe it. The elusiveness of photographs is part of the problem for him. He’s trying to learn things from a photograph, trying to figure out who his mother and father are from photographs, and he can’t.