Lynne Tillman in conversation with Nell Painter in The Paris Review 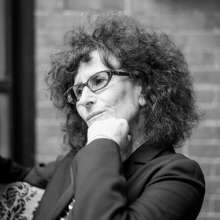 TILLMAN: I’m interested in your decision to become a professional artist, and to go to art school after a distinguished career in history. After many years of teaching, you were placed in the position of being a student. Because I’ve taught in M.F.A. programs, I’ve been around older students, and I’ve seen how often they feel reduced. Why didn’t you just paint, and call yourself an artist?

PAINTER: Well, I tried that, but I knew that my skills were old. I had twentieth-century skills. I took a pastels class with a very nice man at the Newark Museum, and I hated it. He instructed me to paint lemons so that I could “feel” them, which I had no interest in. It wasn’t rigorous enough.

If Princeton’s visual arts program had been a degree program, I would have stayed there. But it’s not a degree program. I took a couple of classes there, though, and I really enjoyed them. I would draw and paint all day, and then do critiques at night until I had to go home.

PAINTER: I think so, yes! I thought I could be the kind of artist that I was a historian. But it’s not possible. I don’t have enough time to work through what I want do in my head, and in my eye, and in my hand. But I think within your question is the bind between doing something out of desire and working professionally, which means dealing with other people’s ideas.

In your essay “Beginning, Middle, End,” you ask, “What is value?” The art world is based in large part on scarcity—the fewer the better. What’s going on for you in that question of value?

TILLMAN: Anyone who is an artist or writer comes up against a reality in which their work is judged in relationship to all the other work being made, and as a result you somehow get placed into a category—by other people, by institutions, by whom you know, by what school you attended. All of these things accrue to your value. We often look to the exceptions, and they supposedly make the rule, but in fact, the rule is that one usually doesn’t become a major art star, one usually doesn’t become a bestseller. Making art of any kind puts you in an ambiguous position, because even if you win every award in the world, it doesn’t mean that your work is great. It can be very self-defeating as an artist to think about value.

Not only did you go to art school at a time when people usually don’t, and change your profession entirely, but you also changed your style. It’s interesting that in the art world, compared to the academic world or the so-called literary world, people dress better.

TILLMAN: Being an artist is about taking on the importance of the visual, of how we create images for each other. In your book, you mention that you had thought you were in a protected realm of art. And that reminds me of a story that Thomas Mann wrote, called Tonio Kröger. I read it when I was an undergraduate, and it really just shook my world. He writes that no one should believe that those who create feel. And that was a revelation to me because I, too, thought that there was a protected realm in which artists and writers would be wonderful.

PAINTER: So what happened?

TILLMAN: Well, then I met artists and writers! As a girl, and then a very young woman, I would go to poetry readings, and I would be treated badly by male poets. I was shocked by that, because I, too, believed that there was a protected realm of art. I thought that being a woman was negligible compared with what you could or would write. It seems that you had a similar experience of disillusionment. At one moment in Old in Art School, your fellow graduate students at RISD are finally reading an article by a black intellectual—bell hooks—and an architecture student says he can’t read anything by a black writer.

PAINTER: Isn’t that awful? He was a little pigheaded twit.

People tend to think of you as a narrative writer—whether you’re writing fiction or nonfiction, interviewing somebody or reviewing something, you’re very interested in narrative. You also talk about truth with a capital T, but you distrust it. In your newest book, Men and Apparitions, how do you find a narrative in this distrust?

TILLMAN: When I capitalize the T in Truth, it’s about singularity. It’s about saying that truth is not singular, that there are many truths, and that they are all lowercase. When I wrote about Warhol’s factory for a book featuring Stephen Shore’s photographs, I conducted a series of oral histories. Even when people were making statements of fact, they often contradicted each other—We worked in the factory at the same time, We didn’t work in the factory at the same time, There were parties, There were no parties—that kind of thing. Everyone agreed about certain things—Warhol was a very hard worker, he was always back there in his studio working. But because experience is so complex, the way two people think about a single event will be different. That’s where narrative and storytelling come into play. Through a character, you can represent a point of view. But because I’m writing fiction in Men and Apparitions, I’m not saying that any given character’s point of view is the only one worth having. I elide statements of Truth, with a capital T, by representing different points of view.

TILLMAN: Zeke is hedging his bets. He’s an anthropologist—we know the critiques of his field and so does he. Representing others is the most controversial issue in art right now—he’s hedging his bets by saying he wants to be taken seriously, but not completely seriously, because he could also be wrong. As a social scientist, he analyzes pictures generally, and family photos in particular.

I became interested in the so-called “new man” that Zeke represents. My younger male friends are very different from men my age. They’re different, even, from men in their fifties and sixties. They were children who were born into the women’s movement, or out of feminism. What is happening to these men? I began to wonder—and this may sound crazy—if maybe we’ll discover that men are more affected by feminism than women. The majority has to give something up when the minority demands it.