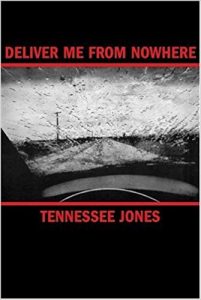 Based on Bruce Springsteen’s 1982 album “Nebraska,” Tennessee Jones—who was three years old when the album came out—uses interlinked short stories to explore the changing face of America over the two decades since it’s release. From the closing of the auto plants to the coming of age of the GLBT movement, the forces behind American’s changing lives find expression in Jones’ diverse characters. From the portrait of a man laid off an auto plant—who fantasizes about eating the car he helped build—to the twelve year old boy who watches his father’s red-river baptism and understands the connection between work and death, Jones uncompromising visions present a brave new view of the shifting territory between gender and class, power and death. A testament to how rock music and literature influence and borrow from one another, Deliver me from Nowhere is as much influenced by Flannery O’Connor and John Steinbeck as it is by Bruce Springsteen, Johnny Cash, Patti Smith, and traditional gospel hymns. Infused with the urgency of rock n’ roll and the restraint of poetry, Tennessee Jones’ unforgettable stories manage to extract the thread of religion that runs through the American experience of rock and roll. 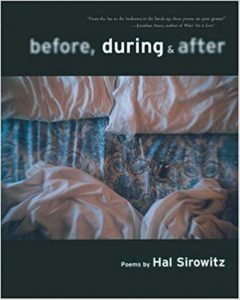 The title of Hal Sirowitz’s new collection Before, During, and After, is all about the one word it elides: Sex. In this book, Sirowitz shares the ups and downs of his romantic history from adolescence to adulthood. Sometimes Hal strikes out, sometimes he gets lucky, but he kisses and tells in the inimitable Sirowitz style that has inspired hilarity and Hal-O-Mania from New York to Norway. And of course, his mother still has plenty to say on the subject.

Product Tags: Before During and After.  Book Author: Hal Sirowitz. 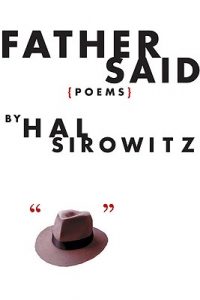 FATHER SAID is the book fans of Sirowitz’s MOTHER SAID have been waiting for: after all, parents come in pairs. Hal’s mother may have dominated the Sirowitz household with her overly-protective advice and flair for inducing Jewish guilt, but Mr. Sirowitz had a few bon mots to impart to his son as well. In FATHER SAID, he teaches Hal important lessons on “How to Be a Humanitarian,” “The Meaning of Racism,” “What to Do When You Burp,” “Being a Good Citizen,” “Why God Created Eve,” “How to Avoid Being Idle,” and “Taking Your Fun While You Can.” Sounds like a typical dad, right? But Mr. Sirowitz’s cautionary tales prove to be as idiosyncratic as his wife’s. In FATHER SAID, Hal gives us a wonderfully funny and tender portrait of his dear old Dad, from childhood memories to his death from cancer. Fathers, mothers, and their sons and daughters everywhere will recognize something of themselves in the Sirowitz family–and while they laugh at their arguments and their nagging, they will also feel the love and familial affection running strongly through these poems. MOTHER SAID sold 20,000 copies and has been translated into nine languages. Both MOTHER SAID and MY THERAPIST SAID 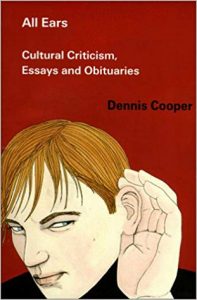 Dennis Cooper is author of six novels with Grove Press and a Contributing Editor at Spin. His novels are fantastic, brooding and violent.

As a journalist, he is solid and well-formed. He has an approachable informality, unawed by massive celebrity His straightforward interviews with Leonardo Di Caprio, Courtney Love, Keanu Reeves, and Bob Mould disarm their subjects to find an urgent, everyday humanity. The feature articles on AIDS, youth culture, and contemporary art take their subjects passionately. But the obituaries for Kurt Cobain, River Phoenix, and William Burroughs are as bracing as a stoic’s evaluation of a dead god.

All Ears for the first time collects this major 20th-Century novelist’s lesser-known work. It will also include several new unpublished piece. All Ears pours necessary critical insight onto the time’s leading cultural luminaries. 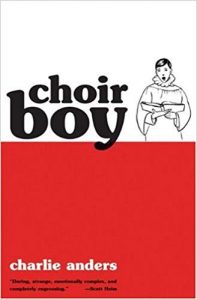 Twelve-year-old choirboy Berry wants nothing more than to remain a choirboy, surrounded by perfect notes, as opposed to his imperfect, quarreling parents. Choral music and the prospect of divinity thrill him. Desperate to keep his voice from changing, he tries to injure himself, and then convinces a clinic to give him testosterone-inhibiting drugs. The hormone pills keep Berry’s voice from deepening but also cause him to grow breasts. Suddenly Berry faces a world of unexpected gender issues that push him into a universe far more complex than anything he has experienced. A fantastical coming-of-age story, Choir Boy combines off-kilter humor and its own brand of modern day magic in a rollicking, bittersweet story about growing up different. 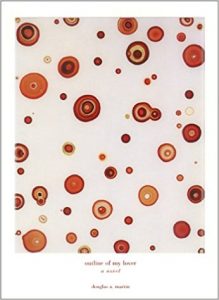 Outline of My Lover

Part love story, part indictment, debut novel Outline of My Lover traces our society’s damaging obsession with celebrity. Douglas A. Martin pays tribute to both Marguerite Duras and the late Kathy Acker with an Ackeresque rewriting of Duras’ The Lover. 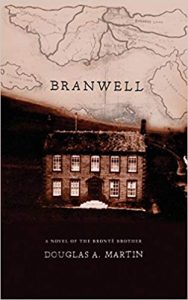 A gifted artist and writer, Branwell Bronte, an only son, is expected to make the family fortune and distinguish the Bronte name. Instead, he dies at 31 from alcohol and opium abuse. Painstakingly tutored at home by his father, Branwell and his sisters write endless stories about imaginary worlds far from their bleak parsonage home. As his sisters spin the stories that will immortalize them, Branwell sinks under the weight of great expectations. With language as rich and dark as the moors of Wuthering Heights and Jane Eyre, Douglas A. Martin probes the locus where history and myth collide, and uncovers Branwell’s lost loves, thwarted talent, and possible homosexuality. Maintaining the haunting quality of childhood memory throughout, Bronte Boy is a genre-bending exploration of the tragic figure of Branwell Bronte and the dismal, dazzling landscape that inspired his sisters to greatness. 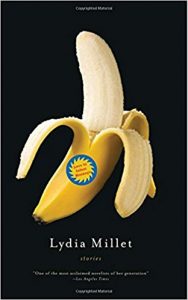 Animals and celebrities share unusual relationships in these hilarious satirical stories by an award-winning contemporary writer.

Lions, Komodo dragons, dogs, monkeys, and pheasants—all have shared spotlights and tabloid headlines with celebrities such as Sharon Stone, Thomas Edison, and David Hasselhoff. Millet hilariously tweaks these unholy communions to run a stake through the heart of our fascination with famous people and pop culture in a wildly inventive collection of stories that “evoke the spectrum of human feeling and also its limits” (Publishers Weekly, Starred Review).

While in so much fiction animals exist as symbols of good and evil or as author stand-ins, they represent nothing but themselves in Millet’s ruthlessly lucid prose. Implacable in their actions, the animals in Millet’s spiraling fictional riffs and flounces show up their humans as bloated with foolishness yet curiously vulnerable, as in a tour-de-force, Kabbalah-infused interior monologue by Madonna after she shoots a pheasant on her Scottish estate. Millet treads newly imaginative territory with these charismatic tales.

Winner of the Akutagawa Prize and the Kenzaburo Oe Prize, these eleven surreal tales, set in the offices, zoos, bus stops, boutiques, and homes of contemporary Japan “are reminiscent, at least to this reader, of Joy Williams and Rivka Galchen and George Saunders” (Weike Wang, The New York Times Book Review, Editors’ Choice).

In the English-language debut of one of Japan’s most fearlessly inventive young writers a housewife takes up bodybuilding and sees radical changes to her physique, which her workaholic husband fails to notice. A boy waits at a bus stop, mocking commuters struggling to keep their umbrellas open in a typhoon, until an old man shows him that they hold the secret to flying. A saleswoman in a clothing boutique waits endlessly on a customer who won’t come out of the fitting room, and who may or may not be human. A newlywed notices that her spouse’s features are beginning to slide around his face to match her own.

In these eleven stories, the individuals who lift the curtains of their orderly homes and workplaces are confronted with the bizarre, the grotesque, the fantastic, the alien–and find a doorway to liberation. 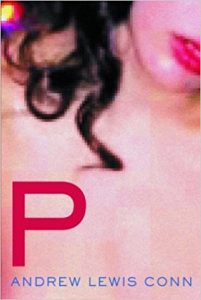 P tells the story of Benjamin Seymour, a failed pornographer obsessed over his lost love, and Finn, a ten-year-old runaway girl genius. Separately and then together they wander the city, searching for home and family. Taking place mostly over the course of a single day, the novel telescopes out from Benji and Finn’s quest to embrace a wide variety of characters and themes; the external journey matched by inward journeys into consciousness and the very nature of language and storytelling itself. One chapter of the book is written in the form of newspaper headlines and articles; one chapter is composed of thirteen vignettes following major and minor characters as they move about the city; one chapter is written in question and answer form; one chapter is a punctuation-less stream of consciousness monologue; and one chapter, the center of the book and its climax, is written in the form of a full-length screenplay. 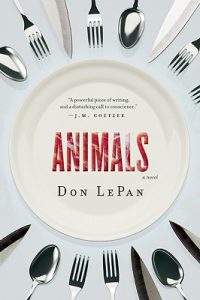 A riveting dystopian novel that examines how humans mistreat animals, and each other: “A powerful piece of writing, and a disturbing call to conscience” (J.M. Coetzee).

It is more than 100 years in the future and the horrors of factory farming, combined with the widespread abuse of antibiotics, have led to mass extinctions. The majority of all mammals, birds, and fish that humans have eaten for millennia no longer exist. Those not fully capable are deemed undeserving of an equal share of scarce medical resources and are ultimately classified as less than human. As paranoia about our food supplies spreads, a forceful new logic takes hold; in the blink of a millennial eye the disenfranchised have become our food. Don LePan’s “well-plotted” and “formally audacious” novel shows us a world at once eerily foreign and disturbingly familiar (Booklist).

It follows the dramatic events that unfold within a family after they take in an abandoned mongrel boy. In the sharp-edged poignancy of the ethical questions it poses, in the striking narrative techniques it employs, and above all, in the remarkable power of the story it tells, Animals proves itself a transformative work of fiction. 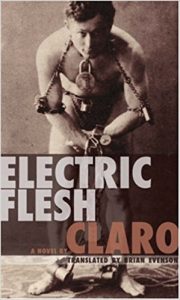 Howard Hordinary is convinced that he’s the bastard grandchild of Harry Houdini. An unemployed executioner with a fetish for electric chairs, Howard is tormented by multiple perversities and obsessed with schemes to restore his status as executioner and as Houdini’s legitimate heir. Cycling back and forth between Hordinary’s paranoid present and Houdini’s fantastical past — teeming with freaks, carnies, scientists, con men, lunatics, and Houdini’s own obsessions — Electric Flesh is a sizzling blend of fact and fiction, penned by an exciting new voice in American fiction.