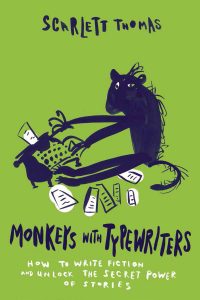 Exploring great plots from Plato to The Matrix, from Tolstoy to Toy Story, Scarlett Thomas’s new book is for writers and readers who want to unlock any narrative and create their own. Filled with creative exercises, structures, and charts, Thomas’ manual breaks down the fiction writing process and demonstrates that everyone has material to write about, whether they believe it or not. Have you ever had your heart broken, or broken someone else’s heart? Have you ever won an argument but later realized you were wrong? Have you ever tripped in public or spilled wine on someone else’s carpet? Monkeys with Typewriters is an ode to the secret power of stories, and a guide to cracking those powers open.

As a bestselling author, Thomas may appear as a naturally gifted writer. However, for Thomas, fiction unlocked itself only once she recognized the importance of an author’s individual experience and one’s willingness to ask questions, not simply provide solutions. She deems the communication of one’s humanity as the key to making a piece relatable, and Thomas does nothing less in her own work. With startling and original insights into how we construct stories, Monkeys with Typewriters is a creative writing book like no other. It will show you how to not only write, but also to a finer degree, how to read. 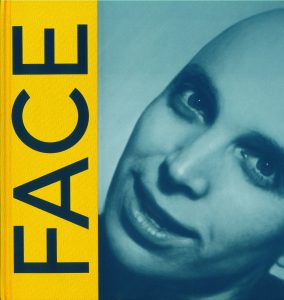 Face chronicles the development of artist Valentin Popov’s traveling exhibition of the same name—a suite of 100 uniformly-sized portraits surveying a social subset of selected friends, acquaintances, and celebrities. Popov explores the mystique of the face not only as the primary organ of human individuation and the immediate modulus of interpersonal recognition, but with respect to such intriguing intangibles as the eternal dialectic between objectivity and subjectivity and the face’s ambiguity as both mirror and mask.

Popov has explored a wide variety of subject matter and media in his art, and all of his works feature the skilled technique and formal ability for which he has become known. His pieces speak to the lineage of art history, yet sometimes vacillate between homage and parody, often laced with a sense of humor, irony, or Pop.

In his latest series, Popov revisits an idea once put forth by Andy Warhol who documented the faces of his friends and acquaintances through photographs and silk screen paintings, many of which were produced at a uniform scale of 40 x 40 inches. Warhol once spoke of mounting an exhibition of these portraits in which the walls would be filled from top to bottom with faces. Face re-examines the portraiture tradition and frames it in postmodern perspective.

Featuring lush, full-color plates and insightful text by Peter Selz and other noted critics, curators, and commentators, this exquisite volume is sure to delight the eye and take pride of place among contemporaneous chronicles of cutting-edge portraiture. 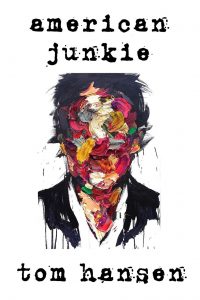 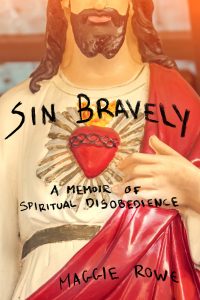 A tour de force, voice-driven debut that examines how one woman finally found the middle ground between Heaven and Hell–an NPR Best Book of the Year.

As a young girl, Maggie Rowe took the idea of salvation very seriously. Growing up in a moderately religious household, her fear of eternal damnation turned into a childhood terror that drove her to become an outrageously dedicated Born-again Christian —regularly slinging Bible verses in cutthroat scripture memorization competitions and assaulting strangers at shopping malls with the “good news” that they were going to hell.

Finally, at nineteen, crippled by her fear, she checked herself in to an Evangelical psychiatric facility. And that is where her journey really began. Surrounded by a ragtag cast of characters, including a former biker meth-head struggling with anger management issues, a set of identical twins tormented by erotic fantasies, a World War II veteran and artist of denial who insists that he’s only “locked up for a tune-up,” and a warm and upbeat chronic depressive who becomes the author’s closest ally, Maggie launches a campaign to, in the words of Martin Luther, “Sin bravely in order to know the forgiveness of God.” 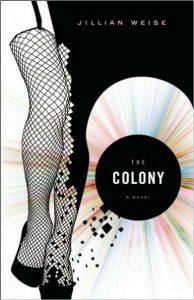 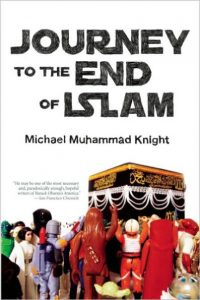 Journey to the End of Islam

In Journey to the End of Islam, Michael Muhammad Knight — whose work has led to him being hailed as both the Jack Kerouac and Hunter S. Thompson of American Islam — wanders through Muslim countries, navigating between conflicting visions of his religion. Visiting holy sites in Pakistan, Syria, Egypt, and Ethiopia, Knight engages both the puritanical Islam promoted by Saudi globalization and the heretical strands of popular folk Islam: shrines, magic, music, and drugs. The conflict of “global” and “local” Islam speaks to Knight’s own experience approaching the Islamic world as a uniquely American Muslim with his own sources: the modern mythologies of the Nation of Islam and Five Percenters, as well as the arguments of Progressive Muslim thinkers for feminism and reform.

Knight’s travels conclude at Islam’s spiritual center, the holy city of Mecca, where he performs the hajj required of every Muslim. During the rites of pilgrimage, he watches as all variations of Islam converge in one place, under the supervision of Saudi Arabia’s religious police. What results is a struggle to separate the spiritual from the political, Knight searching for a personal relationship to Islam in the context of how it’s defined by the external world. 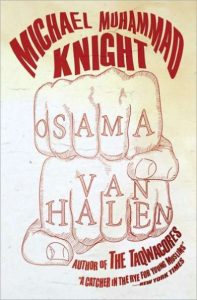 Amazing Ayyub, an Iranian Shi’ite skinhead, and Rabeya, a burqa-wearing punk, have kidnapped Matt Damon and are holding him hostage. They demand that Hollywood depict Muslims in a positive light—“just one movie where we’re not these two-dimensional al Qaeda stereotypes.” But Damon’s concerned they’re playing into that same terrorist paradigm, thereby furthering the neoconservative perception of Islam.

Meanwhile, Ayyub embarks on a mission to rid the taqwacore scene of a Muslim pop-punk band called Shah 79. Along the way, he makes himself invisible, escapes punk-eating zombies in a mosque off the desert highway, and runs into some psychobilly jinns. Things turn existential when Ayyub finds himself face-to-face with his creator—no, not Allah, but the author.

This riotous journey of enlightenment reads like a religious service for teenagers on Halloween. But it isn’t all raucous fun; written into his own novel, the author finds he is at the mercy of his creation. 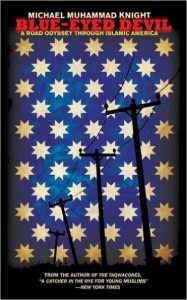 Michael Muhammad Knight embarks on a quest for an indigenous American Islam in a series of interstate odysseys. Traveling 20,000 miles by Greyhound in sixty days, he squats in run-down mosques, pursues Muslim romance, is detained at the U.S.-Canadian border with a trunkload of Shia literature, crashes Islamic Society of North America conventions, stink-palms Cat Stevens, and limps across Chicago to find the grave of Noble Drew Ali, filling dozens of notebooks along the way. The result is this semi-autobiographical book, with multiple histories of Fard and the landscape of American Islam woven into Knight’s own story.

In the course of his adventures, Knight sorts out his own relationship to Islam as he journeys from punk provocateur to a recognized voice in the community, and watches first-hand the collapse of a liberal Islamic dream. The book’s extensive cast of characters includes anarchist Sufi heretics, vegan kungfu punks, tattoo-sleeved converts in hard-core bands, spiritual drug dealers, Islamic feminists, slick media entrepreneurs, sages of the street, the grandsons of Elijah Muhammad and Malcolm X, and a group called Muslims for Bush. 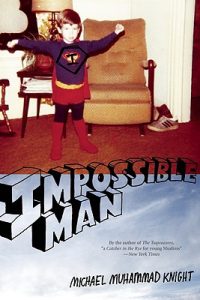 Recognized by readers of his novel, The Taqwacores, as the godfather of American Muslim punk, Michael Muhammad Knight is a voice for the growing number of teenagers who choose neither side of the “Clash of Civilizations.” Knight has now written his personal story, a chronicle of his bizarre and traumatic boyhood and his conversion to Islam during a turbulent adolescence.
Impossible Man follows a boy’s struggle in coming to terms with his father—a paranoid schizophrenic and white supremacist who had threatened to decapitate Michael when he was a baby—and his father’s place in his own identity. It is also the story of a teenager’s troubled path to maturity and the influences that steady him along the way. Knight’s encounter with Malcolm X’s autobiography transforms him from a disturbed teenager engaged in correspondence with Charles Manson to a zealous Muslim convert who travels to Pakistan and studies in a madrassa. Later disillusioned by radical religion, he again faces the crisis of self-definition.
For all its extremes, Impossible Man describes a universal journey: a wounded boy in search of a working model of manhood, going to outrageous lengths to find it. 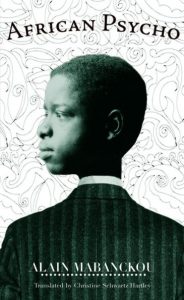 Its title recalls Bret Easton Ellis’s infamous book, but while Ellis’s narrator was a blank slate, African Psycho’s protagonist is a quivering mass of lies, neuroses, and relentless internal chatter. Gregoire Nakobomayo, a petty criminal, has decided to kill his girlfriend Germaine. He’s planned the crime for some time, but still, the act of murder requires a bit of psychological and logistical preparation. Luckily, he has a mentor to call on, the far more accomplished serial killer Angoualima. The fact that Angoualima is dead doesn’t prevent Gregoire from holding lengthy conversations with him. Little by little, Gregoire interweaves Angoualima’s life and criminal exploits with his own. Continuing with the plan despite a string of botched attempts, Gregoire’s final shot at offing Germaine leads to an abrupt unraveling. Lauded in France for its fresh and witty style, African Psycho’s inventive use of language surprises and relieves the reader by injecting humor into this disturbing subject.