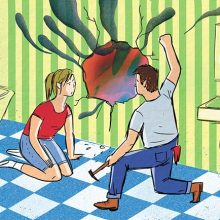 A few weeks after moving into our new house, I noticed a strange, unaccounted-for bump-out in our bathroom. It was a big, square space between the bathroom and the bedroom I use as a writing studio.

Since buying the house, I’ve been humbled to realize the magnitude of all that I don’t know about how houses work. I’ve become extremely comfortable asking my boyfriend, Ian, Very Stupid Questions about our house, including, “What is a storm window?,” “Why can’t we just rip up all the carpet this afternoon?” and “What are rain gutters for, exactly? Like I know they collect rain and put it somewhere else, but why do you need to do that?” So when I asked Ian what was in the bump-out space, I fully expected him to know, because somehow Ian knows the answer to all my Very Stupid Questions. I was expecting the kind of response I always get, where Ian looks at me with more patience and kindness than I’ve ever had for anything, and says something like, “The water heater is in there,” or “The pipes for the drainage system run through that space.”

But he said, “I don’t know,” and started knocking on the bump-out with his fist. “It sounds hollow.”

We went outside to look for clues. I didn’t really know what we were looking for but I stood next to Ian and looked at the part of the house where the mystery space was located and said, “Hmm,” in various intonations.

“Well, there are no vents or pipes coming out of that space,” Ian said. “Weird.”

I was pretty content in not knowing what was in the mystery spot and moving on with my life, but Ian brought it up frequently after that.

“I wonder what’s in there,” he’d say. “It’s so weird to just have unaccounted-for space. Let’s cut through the drywall.”

“Absolutely not,” I said. There was probably some good reason one of the previous owners closed the space off. You don’t just cordon off a section of your house for nothing. There was probably a dead body or an evil spirit lurking within those walls. Why would we want to deal with that?