Cleveland Review of Books reviews the new edition of American Genius, A Comedy 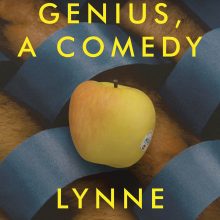 Imagine being sucked into the swirling vortex of the thoughts that plague just before bedtime, but rather than your own, those of another. That is more or less the sensation of reading this 2008 title (recently re-released by Soft Skull press) with an introduction by Lucy Ives.  The book is a variation of the great American novel, where the epic feats mostly occur inside the head of its narrator, who is more interested in reflection on the past than participation in the present. Ives writes, “While she seems to allow that the present, as a distinct moment, exists, she seems none too sure that it is more than a mushy amalgam of past temporalities.” Or, from the mouth of our narrator herself, “It’s easy to be distracted, especially if you relish the past, dislike it, or wonder at its other, unchosen possibilities.” She is a historian, after all. There are no chapter breaks in the book; instead the reader is pulled into the vortex of Helen’s thoughts as her mind flits from one curiosity to another, from childhood memory to societal observation. If Jane Austen were pulled along a post-modern highway into the 21st century, forced to shed her fixation on marriage being the ultimate happy ending, the resulting novel might read a little like this.