A Novel of the Brontë Brother

by Douglas A. Martin

For readers of Michael Cunningham’s The Hours and Madeline Miller’s Song of Achilles, this genre-bending exploration of the tragic figure of Branwell Brontë and the dismal, dazzling landscape that inspired his sisters to greatness is now available in a new edition with an introduction by Darcey Steinke.

Branwell Brontë–brother of Charlotte, Emily, and Anne—has a childhood marked by tragedy and the weight of expectations. After the early deaths of his mother and a beloved older sister, he is kept away from school and tutored at home by his father, a curate, who rests all his ambitions for his children on his only son. Branwell grows up isolated in his family’s parsonage on the moors, learning Latin and Greek, being trained in painting, and collaborating on endless stories and poems with his sisters. Yet while his sisters go on to write Wuthering Heights, Jane Eyre, and Agnes Grey, Branwell wanders from job to job, growing increasingly dependent on alcohol and opium and failing to become a great poet or artist.

With rich, suggestive sentences “perfectly fitted to this famously imaginative, headstrong family” (Publishers Weekly), Branwell is a portrait of childhood dreams, thwarted desire, the confinements of gender—and an homage to the landscape and milieu that inspired some of the most revolutionary works of English literature.

"This mesmerizing new novel, by the brilliant Douglas A. Martin, leaves an indelible imprint of the least known Brontë sibling, offering a lucid, evocative portrait of the devastating effects of being considered not a genius, but genius-adjacent. In his ripe, haunting narrative, Martin depicts the short, addiction-filled life of Branwell. sharing insight into the pressures he felt, as both a boy and a man, to live up to the loftiest of artistic standards. Like all great fiction-inspired-by-fact, there's a dream-like quality to Branwell, a sense that this lyrical fantasy reveals more truth than any historical record ever could." --Kristin Iversen, Refinery29

"Branwell is an opium dream, akin to the quasi-documentary recits of Hervé Guibert--lyrical, hypnotic, genre-bending. Martin's novel functions as a fictional essay on the troubled, alluring legend of Branwell Brontë, as well as a truly poetic experiment in how to push autobiographical fantasy to its limits." --Wayne Koestenbaum, author of Figure It Out

"In Branwell, his luminous, cameo-like new novel, Douglas Martin (Outline of My Lover) pays homage to this unlikely subject, creating a moving and evocative portrait of a boy doomed to enter history as a sad footnote to his sisters' lives. . . . the prose here is so finely wrought that the novel has an otherworldly feel." --The Brooklyn Rail

"Douglas A. Martin has created a gem of a novel with Branwell: A Novel of the Brontë Brother, the story of Branwell Brontë and his failure to realize the expectations of others as well as himself. This depiction of the lone Brontë brother is dark and well-told in the magnificent voice of the author. As Branwell descends into addiction and self-destruction, Martin's fanciful prose depicts the lad's moods and actions delicately and perceptively, to the very end." --Largehearted Boy

"Douglas A. Martin's Branwell takes the airy Brontë myth and brings it back down to earth. Reissued with an excellent introduction by the novelist Darcey Steinke, Branwell serves as an imaginative biography of the ne'er-do-well Brontë brother: a talented, desirous would-be artist/poet who became a has-been drunk before dying at the age of thirty-one . . . Martin's writing really does display the compressed lyricism and rhythms of poetry. His sentences are crisp and cadenced, his paragraphs often a single line." --Anthony Domestico, Commonweal Magazine

"Martin has evocatively captured the sad parameters of Branwell's world, revealing the pattern of his self-destructive path through life in a way that is painful but also memorable."--The Irish Times

"Douglas A. Martin's Acker is exactly the kind of literary criticism I want to read right now: an open-ended yet utterly thorough record of one deft, curious, intrepid mind beholding another. Personal when he needs to be and clinical when his investigation calls for it, Martin acts as the perfect counterpoint to Acker's all caps bombast." --Maggie Nelson

"In his unconventional approach to his equally unconventional subject--Acker was an iconoclastic experimental novelist, poet, essayist and feminist, who died of breast cancer in 1997--Martin's lyrical criticism blends unmistakable (yet unshowy) erudition and intellectual rigor with disarming intimacy and self-revelation." --The New York Times 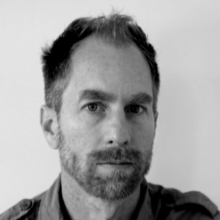 Martin is the author of the poetry collections My Gradual Demise & Honeysuckle (1994) and Servicing the Salamander (1998) and co-author of The Haiku Year (1998)—a project that required him to compose a haiku a day. He has also published a collection of short stories, They Change the Subject (2005), and a trilogy of prose pieces, Your Body Figured (2008). His novels include Outline of My Lover (2000), named an International Book of the Year in The Times Literary Supplement and a finalist for a Lambda Literary Award; Branwell: A Novel of the Brontë Brother (2006); Once You Go Back (2009); and Wolf (2020).