Nick Hornby meets Patti Smith, Mean Streets meets A Visit From the Goon Squad in this quintessential New York City story about two people who knew each other in the downtown music scene in the 1980s, meet again in the present day, and fall in love.

Mike knew June in New York’s downtown music scene in the eighties. Back then, he thought she was “the living night—all the glamour and potential of a New York night when you’re 25.” Now he’s twice divorced and happy to be alone—so happy he’s writing a book about it. Then he meets June again. “And here she was with a raincoat over the back of the chair talking about getting a divorce and saying she’s done with relationships. Her ice-calm eyes are the same, the same her glory of curls.”

Jacket Weather is about awakening to love—dizzying, all-consuming, worldview-shaking love—when it’s least expected. It’s also about remaining alert to today’s pleasures—exploring the city, observing the seasons, listening to the guys at the gym—while time is slipping away. Told in fragments of narrative, reveries, recipes, bits of conversation and snatches of weather, the book collapses a decade in Mike and June’s life and shifts a reader to a glowing nostalgia for the present. 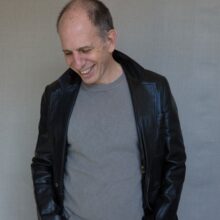 Mike DeCapite has published the novel Through the Windshield, the chapbook Creamsicle Blue, and the short-prose collection Radiant Fog under the banner of Sparkle Street Books. Cuz Editions published his story “Sitting Pretty,” later anthologized in The Italian American Reader. DeCapite grew up in Cleveland and has lived in London and San Francisco, but has spent most of his time in New York City, where he now resides.