Or, The Real Poet; Or, The Origin of the World

This New York Times Book Review Editors’ Choice, is “hilarious . . . a riotous success. Equal parts campus novel, buddy comedy and meditation on art-making under late capitalism, the novel is a hugely funny portrait of an egomaniac and his nebbish best friend” (The Washington Post).

It’s the end of summer 2003. George W. Bush has recently declared the mission in Iraq accomplished, the unemployment rate is at its highest in years, and Martha Stewart has just been indicted for insider trading. Meanwhile, somewhere in the Midwest, Troy Augustus Loudermilk (fair-haired, statuesque, charismatic) and his companion Harry Rego (definitely none of those things) step out of a silver Land Cruiser and onto the campus of The Seminars, America’s most prestigious creative writing program, to which Loudermilk has recently been accepted for his excellence in poetry.

Loudermilk, however, has never written a poem in his life.

Wickedly entertaining, beguiling, layered, and sly, Loudermilk is a social novel for our time: a comedy of errors that deftly examines class, gender, and inheritance, and subverts our pieties about literature, authorship, art making, and the institutions that sustain them.

“This clever satire of writing programs exhibits, with persuasive bitterness, the damage wreaked by the idea that literature is competition.” ––The New York Times Book Review, Editors' Choice

"Funny, cerebral . . . Ives’s hyperbolic satire—her outsized, loquacious characters, her stylistic brio—lays bare the central fallacy of 'write what you know.' In one sense, we believe Ives is drawing from her own, all-too-real experience. And yet, with its ludic meta-fictionality and the self-conscious construction of characters, the novel cleverly dodges knowable reality, circumventing the question of authenticity altogether.” ––Hermione Hoby, The New Yorker

"Ives is either puncturing a myth about Iowa or advancing it; either option makes her book an indulgence . . . Ives’s interests point toward the philosophical, even the mystical. Loudermilk is not just funny; it becomes a layered exploration of the creative process . . . Ives approaches the students themselves with canny tenderness, and their work (which the novel excerpts, delightfully) with grave respect. Her own language is prickly and odd, with a distracted quality, as if she were trying to narrate while another voice is murmuring in her ear.” ––Katy Waldman, The New Yorker

"Hilarious . . . A riotous success. Equal parts campus novel, buddy comedy and meditation on art-making under late capitalism, the novel is a hugely funny portrait of an egomaniac and his nebbish best friend.” ––Rebekah Frumkin, The Washington Post

“A narrative in defense of narrative . . . In a literary critical flourish, [Ives] combines elements of libertine novels, realist novels, social novels, inherited wealth lit, postmodern novels, period pieces, poetry, satire, and revenge plots . . . A funny and cutting novel whose critiques of inherited wealth and its effects on culture in the aughts will keep being true until a full redistribution of wealth, beginning with reparations, occurs.” ––Charlie Markbreiter, The Nation

“A cutting, sparkling new novel from Lucy Ives . . . As Ives tells the story of Loudermilk and Harry, and the assorted people they encounter on campus, it becomes clear that she is telling the story of art, of self-invention, of libertines, of culture, of America. Needless to say, things get dark. And yet, it never gets so dark that you can't see what's right in front of you, in all of its tragic hilarity: the truth of what America is at its very worst and its very best—which, as it turns out, are pretty much the same thing.” ––Kristin Iversen, NYLON 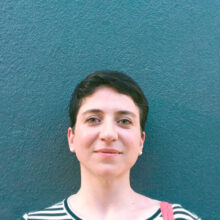 Lucy Ives is the author of the novel Impossible Views of the World. Her writing has appeared in Art in America, Artforum, the Baffler, frieze, Granta, Lapham’s Quarterly, Vogue, and at newyorker.com. For five years she was an editor with the online magazine Triple Canopy. A graduate of Harvard University and the Iowa Writers’ Workshop, she holds a PhD in comparative literature from New York University.She currently teaches in the Image Text interdisciplinary MFA program at Ithaca College, as well as in NYU’s XE: Experimental Humanities & Social Engagement Master’s program. She is the recipient of a 2018 Creative Capital | Andy Warhol Foundation Arts Writers Grant.