After waking up with a strange taste in her mouth and mysterious bruises, former child pageant star Jessica Clink unwittingly begins an investigation into a nefarious deep state underworld. Equipped with the eccentric education of her father, Dr. Clink (a professor of Boredom Studies and the founder of an elite study group known as the Devil’s Workshop), Jessica uncovers a disquieting connection between her former life as a beauty queen and an offshoot of Project MKUltra known as MONARCH.

As Jessica moves closer to the truth, she begins to suspect the involvement of everyone around her, including her own mother, Grethe (a Norwegian pageant queen turned occult American wellness guru for suburban housewives). With the help of Christine (her black-lipsticked riot grrrl babysitter and confidante), Jessica sets out to take down Project MONARCH. More importantly, she must discover if her first love, fellow teen queen Veronica Marshall, was genuine or yet another deep state plant.

Merging iconic true crime stories of the ’90s (Lorena Bobbitt, Nicole Brown Simpson, and JonBenét Ramsey) with theories of human consciousness, folklore, and a perennial cultural fixation with dead girls, MONARCH questions the shadow sides of self-concept: Who are you if you don’t know yourself?

One of Lit Hub‘s Most Anticipated Books of the Year

“A deeply introspective novel with a notable metaphor for reinvention after trauma in the form of a weaponized pageant girl.”—Kirkus Reviews

“Candice Wuehle had me at ‘Jon Benet Ramsey.’ The poet’s new novel follows a former child pageant star as she discovers ties to her previous glory and a deep state government program. Add an occult wellness guru to the mix, a heaping of mommy issues, and a queer romance for taste and this might just be my ideal book.” —Kerensa Cadenas, Thrillist

“Don DeLillo can only dream of being Candice Wuehle, who’s wrenched the maximalist postmodern novel from the hands of old white men and given it an enticingly feminist spin. MONARCH is a smart, weird, funny gut punch, the kind of book that will blister your brain in the best possible way.” —Rafael Frumkin, author of The Comedown

“This book is really quite sinister, and I mean that in the Latin sense—MONARCH takes the left-hand path through a chilling (and, if you’re honest with yourself, quite real) landscape as Jessica, a decommissioned MKUltra-esque beauty queen, traces back to her origins as such. Along the way, she has to tell the true from the false, which can be difficult when you have a closet full of alters and a lot of gruesome off-label memories.

Underneath it all is a question you can probably relate to even if you aren’t the progeny of a cryogenically preserved mother and a father who lectures on Boredom Studies: How do we know which of our reactions belong to us? How can we tell apart the conditioned self from the one we actually live with, especially when we’ve been trauma-trained into not looking too closely at certain facts? What happens when our frozen selves start to thaw?

If you’ve always been suspicious of the institutions of childhood, beauty, and sentimentality, this book is for you. If you crave a frosty narrative voice with the whip and torque of a bitchy gymnast, this book is for you. It will make you smarter. And it will also upset your schema for the world—but you’ll be glad, I promise.” —Sarah Elaine Smith, author of Marilou is Everywhere

“In this riddled pageantric, insomniac, photographic, and university-infused world of eating disorders, triple suicides, astral projections, enigmatic bruises, and uncontrollable impulses, Candice Wuehle’s poetic and narrative gaze on everything she Midas-touches is eyelined, eyeshadowed, polished, Norwegian lip-penciled, and loose powdered with her devilishly inventive, singularly imaginative beauty and a devastating wry sense of humor. Her brilliance in MONARCH will lacquer, enamel, and wax you and turn your mind inside out like a monarch butterfly macerated in emulsion.” —Vi Khi Nao, author of The Vegas Dilemma and Swimming with Dead Stars

“A wise, unsettling, and multifaceted masterpiece, MONARCH succeeds on all levels—as a portrait of an endearingly dysfunctional family, as a shadow history of Y2K and the hidden power structure underlying and undermining contemporary life, and as a profound exploration of the extremely dicey prospect of being a self in a body in the world. Unless you’re hiding in an underground city or frozen in a kryokammer in the desert, you’ll want to run out and get this one right away!” —David Leo Rice, author of The Dodge City Trilogy, Angel House, and Drifter: Stories 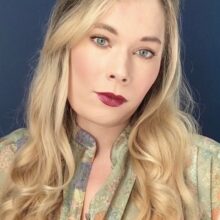 Candice Wuehle is the author of the poetry collections Fidelitoria: Fixed or Fluxed, BOUND, and Death Industrial Complex, shortlisted for the Believer Book Award. A graduate of the Iowa Writers’ Workshop, she holds a PhD in literary studies and creative writing from the University of Kansas.