“Years ago, when American Genius: A Comedy was sent to an editor, she wrote a long rejection letter that included this incredible sentence. It said, “I don’t know what Lynne is trying to teach me”. The idea that she was so disturbed that anyone was trying to teach her something. She wouldn’t have been if it were a male writer. I can’t imagine her writing that to a big male writer. Not that I’m a big female writer, or whatever I am, an unfortunately gendered person who tries to break down those genders in her own way.” 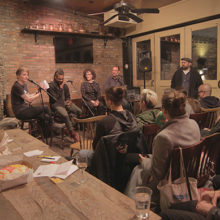