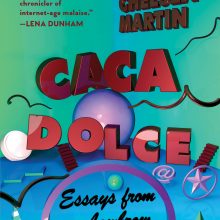 Do you ever start to, you know, hate the internet and every terrible thing it’s brought into your life, like the tweets of Donald Trump and, I don’t know, Facebook? Same. Me too. But then, if it weren’t for the internet, I wouldn’t have been introduced to the strange delight that is the voice of Chelsea Martin, who first came to my attention thanks to the internet (obviously), which is where I happened upon a piece she wrote for Motherboard about trying to cure her acne by dousing it with her own urine every morning. (It both did and didn’t work. Anyway.)

This collection of essays does not involve much pee-play, but it is a similarly candid, often hilarious look at Martin’s own life, dating back to when she was a young child who mistakenly thought she’d had sex with her similarly-aged cousin. (We’ve all been there, right?) Part of the beauty of this book is that Martin is brutally fearless in how she depicts many of the . . . if not ugly exactly, then at least banal parts of growing up; those times when you feel like you might just be one of the aliens you’re fervently hoping will stage an invasion in your neighborhood. (They’ll know it’s yours because of all the houses covered in toilet paper, courtesy of . . . you.) Though Martin is undeniably strong at chronicling the general feelings of ennui and malaise that afflict her generation, finding no topic too insignificant to dissect, she also delves into far more difficult parts of her past, like her relationship with her long-absent father, whose return into her life is the very opposite of comforting. (A restraining order is explored, but ultimately abandoned.) Perfect for anyone who has ever hated, loved, and laughed at themselves—particularly if they’ve done those things all at once—Caca Dolce serves to let all the weird millennials out there know that they’re not aliens at all, they’re actually normal. It’s the world that’s strange. Now, let’s go cover it in some T.P.