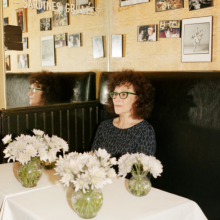 “There’s a photograph—it documents something, but the image is another thing,” contends Lynne Tillman. She’s tucked into a booth at the French restaurant Lucien in New York’s Lower East Side. Behind the writer, framed snapshots of celebrities who’ve visited the joint crowd the wall, everyone from Joan Didion to Ryan Gosling. The way these well-known personalities look in candid off-duty photos, frequently with hats pulled down past their eyebrows, sparks a jarring sense of recognition. Simultaneously remaining in the shadow of the not totally recognizable—is that Bono or your second cousin’s uncle?—proves exactly the point Tillman is trying to make: distinguishing a photo from an image. It’s also one of the central ideas in her latest book, Men and Apparitions, a fictional memoir from the point of view of a 38-year-old academic who has devoted his life to studying family photos.

This afternoon, Tillman is the image of a downtown intellectual, a midnight blue jacket and thick-rimmed glasses framing a constant spark of curiosity in her bottomless dark eyes. We’re only a few blocks from the rent-stabilized apartment she shares with musician David Hofstra, and also from where she first saw Kathy Acker read in the 70s. For decades, Tillman’s been a familiar figure in the Lower East Side’s arts scene. She’s the author of 15 books and a columnist for the contemporary art magazine Frieze. She’s been named a Guggenheim fellow, and twice a National Book Awards finalist, respectively for fiction and criticism. Tillman is also just someone you see around downtown if you go to enough readings and openings. With her curly hair and small frame, it’s difficult to mistake her for anybody else.

“People have been saying forever, we live in a glut of images,” says Tillman, recounting the starting point of her new novel. “I thought to myself, how would you tell that story?” Ezekiel Hooper Stark is the visual culture anthropologist she dreamt up to translate our graphic-saturated era into narrative meditations. “People think they are going to get truth with a capital T with non-fiction and don’t believe any more that a novel can tell the truth. To me that’s very sad. The imagination is very important,” the writer contends. Through her made-up family-photo ethnographer haunted by dead relatives and attachment issues, movie stars, and found photos, Tillman grasps the notions we contrive from the sea of visual ephemera in which we’re submerged. Her book is especially interested in the image of themselves young men construe. “Guys are very conscious of the image they are putting together of themselves.” She adds, “At least the guys I know.”