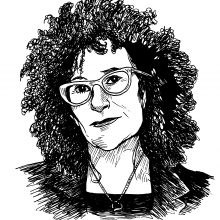 BLVR: How much has your Frieze work informed your forthcoming novel, Men and Apparitions?

LT: You know, I’ve been mixing fiction and nonfiction for a long time. That’s part of the history of the novel. What the Frieze column has done is embolden me. I was hesitant at first to do a column, to express my opinions. It’s been helpful for me to put forth statements and ideas not through a character. And it’s made me more willing to take more risks. Writers don’t want to appear to be stupid. I don’t know—maybe people become writers so that they can prove that they’re not. Of course getting a book published doesn’t mean that they’re not stupid. [Laughs] At a certain point you have to stop trying to prove something and write because you need to think about something and want to communicate, in a very broad sense. There are very many ways in which we communicate. And often it’s with grunts. I was talking to my students at the University at Albany about how often they use fuck in a sentence. Saying to them, “You could find other words.” They explained that each time they used the word fuck, it was differently inflected, although they didn’t put it that way. And I thought, OK, they’ve got an argument there.