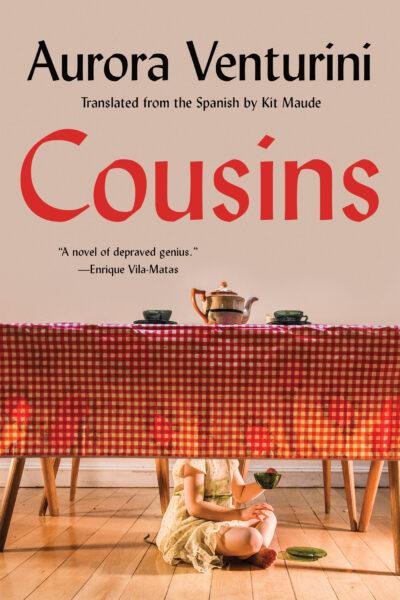 The literary masterpiece of Aurora Venturini, a major voice in international literature, never before translated into English

At the age of eighty-five, Aurora Venturini stunned Argentine readers when her darkly funny and formally daring novel, Cousins (Las primas), won Página/12’s New Novel Award. She had already written more than forty books, but it was only then, in 2007, that she was widely recognized as a paradigm-shifting voice in Spanish-language literature.

Venturini never stopped writing in her ninety-two years, and produced an oeuvre that is mischievous and stylish, vital and mysterious, and completely original. She lived a life immersed in the literature and culture of the twentieth century: her first award was given to her in person by Jorge Luis Borges; she was friends and colleagues with Eva Perón; and when she lived in exile in Paris, she socialized with a sparkling milieu of writers and philosophers, including Simone de Beauvoir and Jean-Paul Sartre.

Cousins, widely regarded as Venturini’s masterpiece, is the story of four women from an impoverished, dysfunctional family in La Plata, Argentina, who are forced to suffer through a series of ordeals, including illegal abortions, miscarriages, sexual abuse, disfigurement, and murder, narrated by a daughter whose success as a painter offers her a chance to achieve economic independence and help her family as best as she can.

Neighborhood mythologies, family, female sexuality, vengeance, and social mobility through art are explored and scrutinized in the unmistakable voice of Yuna—who stares wildly at the world in which she is compelled to live—a voice unique in contemporary literature whose unconventional style can be candid, brutal, sharp, and utterly breathtaking.

With the translation of Cousins into several languages for the first time, Aurora Venturini is now being discovered internationally and championed as a major voice in Latin American literature.

Kit Maude is a literary translator based in Buenos Aires. He has translated dozens of writers from Spain and Latin America for a wide variety of publishers, publications and institutions and writes reviews and literary criticism for publications in Argentina, the USA and the UK.

Aurora Venturini was born in 1922 in La Plata, Buenos Aires, Argentina. She was an adviser to the Institute of the Child’s Psychology and Re-education where she met and became intimate friends with Eva Perón.  In 1948, Jorge Luis Borges personally handed her the Initiation Award (Premio Iniciación) for her book El solitario. She studied Psychology at the University of Paris, where she self-exiled for 25 years after the Liberating Revolution. In Paris she lived in the company of Violette Leduc and became a friend of Jean-Paul Sartre, Simone de Beauvoir, Albert Camus, Eugène Ionesco and Juliette Gréco. She translated and wrote critical essays on poets such as Isidore Ducasse, Conde de Lautréamont, François Villon and Arthur Rimbaud; for the translations of the latter two authors she received the Iron Cross decoration granted by the French government. In 2007, she received the Página/12 New Novel Award for Las primas (Cousins). She died on November 24, 2015, in Buenos Aires at the age of 92.