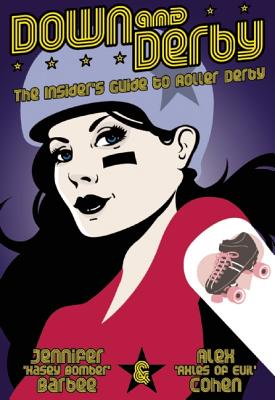 The Insider's Guide to Roller Derby

by Alex Cohen and Jennifer Barbee

When most Americans hear the words “roller derby” today, they think of the kitschy sport once popular on weekend television during the seventies and eighties. Originally an endurance competition where skaters traveled the equivalent of a trip between Los Angeles and New York, roller derby gradually evolved into a violent contact sport often involving fake fighting, and a kitschy weekend-television staple during the seventies and eighties. But in recent decades it’s come back strong, with more than 17,000 skaters in more than four hundred leagues around the world, and countless die-hard fans. Down and Derby will tell you everything you ever wanted to know about the sport. Written by veteran skaters as both a history and a how-to, it’s a brassy celebration of every aspect of the sport, from its origins in the late 1800s, to the rules of a modern bout, to the science of picking an alias, to the many ways you can get involved off skates.

Informative, entertaining, and executed with the same tough, sassy, DIY attitude—leavened with plenty of humor—that the sport is known for, Down and Derby is a great read for both skaters and spectators.

“As someone who has witnessed the many transitions of roller derby almost from the beginning, I can say that this chronicle isn’t just for fans of all the stages of the game, but for anyone who wants to enjoy an inspiring story about truly fascinating people.” —Jerry Seltzer, derby pioneer and owner of the original Roller Derby league

“Fast, dirty, seductive, kooky, cunning, foxy, cheeky, wicked, crazy, bad arse and most importantly, no bullshit. These are the words that tumble from my mind to my fingers having read Down and Derby. Veterans in the world of roller derby, Axles and Kasey are an inspiration to derby girls everywhere, myself included. The Whip It Hurl Scouts couldn’t have done it without them. I can’t say enough about these women or this book. Game on!” —Zoë “Bloody Holly” Bell, stuntwoman and star of Quentin Tarantino’s Death Proof

“Roller derby is one of the most empowering and intriguing worlds I’ve ever come across. It’s amazing to encounter a sport where women get out there and do such extraordinary things. But derby is more than just a sport, it’s a sisterhood.” —Drew Barrymore

“A rock’em sock’em history and how-to guide by two roller girls about the derby they love to death. Told in a no-BS style that makes you feel like an insider sharing a beer after the match. This is sparkly, terrific, and bad ass!” —John Doe of X

“Feminism can come in the form of placards and protests, but Down and Derby proves that a girl’s liberation can also involve strapping on a pair of skates, taking on a kick-ass nickname, and throwing a few hip checks in the process.” —Marisa Meltzer, author of Girl Power

“Part manifesto, part how-to-guide, Down and Derby demystifies the world of roller derby, showing readers it’s as inclusive as it is cool. After finishing this book, you no longer have an excuse for keeping your boring name or for never trying on a pair of skates. This is required reading for anyone who's searching for new ways to be fearless.” —Carrie Brownstein of Sleater-Kinney

“Axles of Evil and Kasey Bomber are two of the most sincere, awesome, kick-ass women I’ve ever met. They are champions of roller derby—and not just in a flashy way but in a really smart way. Being able to have learned to skate under their wing has been one of the greatest experiences of my life. Down and Derby is the next best thing to training with them personally. If you love derby this is the book you’ve been waiting for.” —Ellen Page, star of Whip It

“As the author of an old Roller Derby book, let me just say this to the new kid on the rink: up with Down and Derby. Whether you’re already a Derby doll or a doll wannabe it’s required reading.” —Frank Deford, author of Five Strides On The Banked Track

JENNIFER BARBEE is the author of Down and Derby.