A woman discovers something toxic at work in the isolated village where she is apprenticing as a pharmacist, in this fable-like novel about power, surveillance, prescriptions, and cures by a captivating debut voice.

On a remote mountaintop somewhere in Europe, accessible only by an ancient funicular, a small pharmacy sits on a square. As if attending confession, townspeople carry their ailments and worries through its doors, in search of healing, reassurance, and a witness to their bodies and their lives.

One day, a young woman arrives in the town to apprentice under its charismatic pharmacist, August Malone. She slowly begins to lose herself in her work, lulled by stories and secrets shared by customers and colleagues. But despite her best efforts to avoid thinking and feeling altogether, as her new boss rises to the position of mayor, she begins to realize that something sinister is going on around her.

The Weak Spot is a fable about our longing for cures, answers, and an audience–and the ways it will be exploited by those who silently hold power in our world.

"In prose reminiscent of Fleur Jaeggy, The Weak Spot is a prismatic fable spiked with dozens of elegant revelations. Lucie Elven is an extremely promising new writer, one in touch with a greater, richer world that exists just below the surface of daily life." --Catherine Lacey, author of Pew and The Answers

"Recalling the mood of Thomas Mann's The Magic Mountain and the aesthetic of a Dario Argento film, The Weak Spot is an evocative and intriguing novel. The thrill is in the prose--vivid, expansive, perfectly controlled. I love where Lucie Elven's sentences take me, and I adore this book." --Lauren Aimee Curtis, author of Dolores

"No word is wasted in Lucie Elven's whipsmart, elegiac debut. Every scene and image is vivid, cutting, and fluid, turning a peculiar mountain town into a wonderland of social insights and frictions. I knew I would be rereading The Weak Spot halfway during my first read--and a few pages into my second read. Elven is a master in the making." --Stephen Kearse, author of In the Heat of the Light

"This eccentric, intensely observed book--full of dry humor and sturdy, elegant sentences--examines the slippery quality of the self in relation to others and the treacherous terrain of a world governed by manipulative men. Slightly gothic, vaguely old-world, and briskly contemporary, The Weak Spot is a singular work from a writer whose fiction I've long admired in the pages of NOON." --Kathryn Scanlan, author of The Dominant Animal and Aug 9—Fog

"The Weak Spot is at once a charming and a gently profound novel, bringing to mind the elegant fabulism of Anne Serre and the grace-filled contemplativeness of Marilynne Robinson’s Housekeeping. In sentences that quietly astonish, Lucie Elven shows us how consciousness is shaped by landscape—by distance, light, and heat—and by radically opening ourselves, for better and for worse, to the aspirations and struggles of others. I know I will be returning to these pages again and again." —Mary South, author of You Will Never Be Forgotten 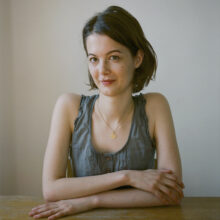 Lucie Elven has written for publications including The London Review of Books, Granta, and NOON. The Weak Spot is her first book. She lives in London.